Rzeszów of today is a district city in south-eastern Poland. The city, which is the capital of the Podkarpackie voivodeship, is also the centre of the Rzeszów agglomeration. Today Rzeszów has a population of just under 200 000 (of which approximately 49 000 are students), as well as numerous universities (e.g. the University of Rzeszów or the Rzeszów University of Technology) and consular representations. Today Rzeszów is a modern, thriving city that can easily compete with other European agglomerations. However, Rzeszów has come a long way since it achieved its present-day status and success.

The beginnings of Rzeszów

Rzeszów is considered to be one of the oldest cities in Poland. The first official document about it was the foundation act, which the city received in 1354. Before this happened, however, the city of Rzeszów had many names. It was called Resovia, Raysha, Reisha, or Reichshof, Rzessow or Rzeschow. It was not until the first ruler of this city, who was knight Jan Pakosławic, changed his surname to Rzeszkowski and gave the city the name which exists to this day. This does not mean, however, that the city of Rzeszów did not begin to exist until the 14th century. Experts estimate that the first settlements in this place were established even in the Neolithic period. Nevertheless, it is considered that a permanent city stronghold was established between the 11th and 13th century by the Poles. However, as a result of the division into districts, the city fell into the hands of the Rusyns and remained there until 1340, when Casimir the Great incorporated the local lands, including Rzeszów, back into Poland.

Development of the city

The beginnings of Rzeszów were certainly not easy. Already in the first half of the 15th century the city was almost completely destroyed by a huge fire. The extensive destruction did not, however, cause the city to collapse, as it was very quickly rebuilt, and thanks to numerous privileges, such as permission to sell beer or salt, trade flourished. The trade privileges, plus the trade routes running through the town, resulted in an extremely dynamic development of the town. As a result, already in 1591, a town hall was built and 9 years later the castle was constructed. The development of Rzeszów was halted when the Lubomirski family took over the city. They stopped the development of trade and drastically reduced the rights of the citizens, at the same time creating a magnate's residence in the city.

The reign of the Lubomirski family in Rzeszów is also probably marked by one of the most important dates, namely August 13, 1769. On that day, a battle with Russian troops took place. As a result of the partition of the whole country, Rzeszów was taken over by Austria. The former Lubomirski residence was turned into a court and prison.

The Free City of Rzeszów

The erasure of Poland from maps did not, of course, cause Rzeszów to disappear from them. The Partition period was also a time of dynamic development. Particularly since 1844, when Rzeszów became a free city. At that time the city started to develop very quickly. Already in 1858, the first railway line was established, in 1888 telephones appeared, and in 1900 a gasworks was built and gas lamps were placed in the city. Less than 11 years later a power station was built and the water supply system started to develop.

The beginning of the 20th century was a period when the town started to be associated with a thriving capitalist centre. It was at this time that major new investments were made in the town. Both new schools and barracks were built. No expense was spared on paving streets, electrifying houses and lighting street lamps with electricity.

The dynamic development of the city was stopped by the outbreak of World War I. Due to its location, Rzeszów became a victim of numerous war actions. The first event that affected the inhabitants was the Battle of Kraśnik. It resulted in an influx of refugees and wounded into the city, whose presence significantly lowered the social mood. Soon afterwards, the Austrian army suffered a number of defeats, which meant that Rzeszów faced a serious threat from the Russian army. The fighting between these powers and, of course, the changing of hands of the city continued until 1915, when hostilities calmed down in the area.

For Rzeszów, the inter-war period was marked by numerous strikes of workers, which in 1937 even ended in clashes with the police. It was also the period when the Central Industrial District was established. As a result, Rzeszów became an extremely important centre for armaments and aviation industries. It was at this time that the State Aviation Works (PZL) and a branch of the Hipolit Cegielski factory were established in the city.

The Second World War was a period of unusual and very severe destruction for the city. Many of the city's monuments, factories and tenement houses were completely or partially destroyed. The actions of Nazi Germany led to the almost complete annihilation of the Jewish population. It is worth mentioning that the first Jewish settlements appeared in Rzeszów before 1615, and Jews constituted a majority of the city's population until the early 20th century. In 1941, the Rzeszów ghetto was established and existed until 1942.

An extremely important moment for the inhabitants of Rzeszów took place on 25 May 1944. On that day, action 'Kośba' took place. It was carried out by Rzeszów Home Army soldiers and resulted in a successful assassination attempt on Gestapo soldiers. The city regained its freedom on 2 August 1944.

After World War II Rzeszów again entered a period of dynamic development. Since the first half of the 20th century the area of the city has quadrupled and numerous industrial plants, factories as well as housing estates were built. This was also the period in which the first institutions of higher education were established, such as the very popular and successful Rzeszów University of Technology or Rzeszów University, which to this day remain the pride of Rzeszów. A film promoting this unique city on the map of Poland will show what the capital of the Podkarpackie voivodeship looks like today and what can be experienced there. 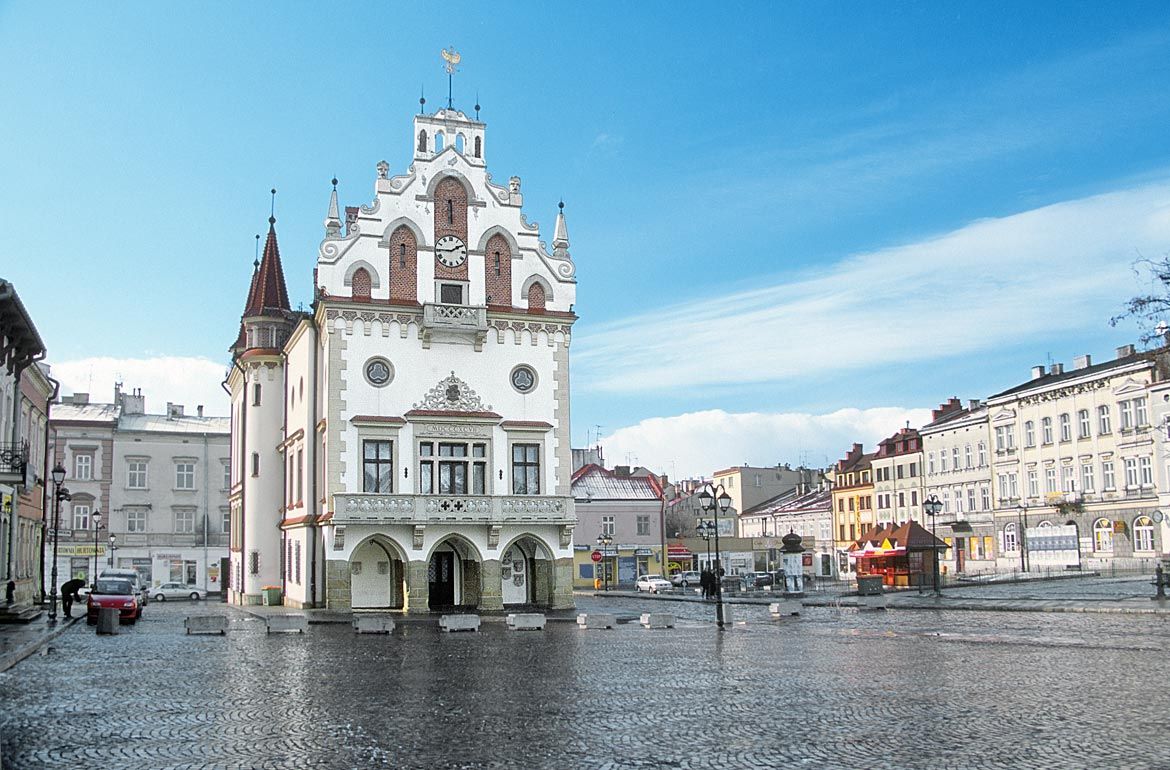 Self-government of the Podkarpackie Voivodeship: https://podkarpackie.pl/